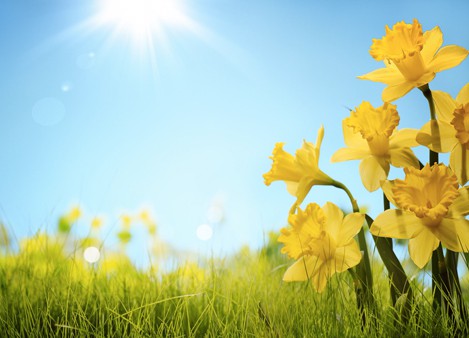 Every spring, Mother Nature gives us countless gifts. That special shade of green on the new leaves on the trees. Incredible blue skies. Warm sunshine. A rainbow of colorful blooms in every garden. Sometimes, we think it’s really nice to find a way to say thank you.

Earth Day falls on April 22 – this year that falls on a Sunday. The first Earth Day celebration was held in 1970. The brainchild of Senator Gaylord Nelson and inspired by the protests of the 1960s, Earth Day began as a “national teach-in on the environment” that attracted 22 million people around the country.

By raising public awareness of pollution, Nelson hoped to bring environmental causes into the national spotlight. It succeeded in a way that was probably beyond his wildest dreams. It not only raised awareness about environmental issues, it changed public opinion. The Environmental Protection Agency reports that, “Public opinion polls indicate that a permanent change in national priorities followed Earth Day 1970. When polled in May 1971, 25 percent of the U.S. public declared protecting the environment to be an important goal, a 2,500 percent increase over 1969.”

When it comes to respecting the earth, we don’t limit ourselves to a single day each year. We like to think that’s one of the reasons why Illusion Unlimited earned a reputation as one of the most innovative salons in Cleveland.

We are one of the top performing Surface hair salons – not just among hair salons in Cleveland, Ohio, but in the whole country. We love Surface products for any number of reasons. A client in who stopped by our Strongsville hair salon to stock up told us that she won’t use anything else. Another client, who was introduced to Surface at our Strongsville salon, said she loves the way it makes her hair feel.

In addition to the great results they provide, Surface was founded on the promise of “Respecting Personal Health and the Earth.” The promote a culture of education, customer service, technical expertise, and incorporate sustainably harvested ingredients and certified organic botanicals in all of their products. The Surface culture is committed to growth, personal health, respect for earth and self and to giving back. Even the name of the company is inspired by the environment. It reflects a passion to develop superior, all-natural products that respect the surface of our earth and to create a strong surface of success that will promote the growth of salons and their guests – and that definitely includes you!

We believe that being a Surface salon is one of the many things that so many people say we’re the best hair salon in Cleveland. Whether you visit, our salon in Parma for highlights, stop by our Broadview Heights salon for a trim or our schedule a mani-pedi at our hair and nail salon in Strongsville, we will always do our best to help you be the best you possible. We know it’s not just about looking good, it’s about feeling great. And if doing something nice for Mother Earth makes you feel good, well then, it’s a win-win!